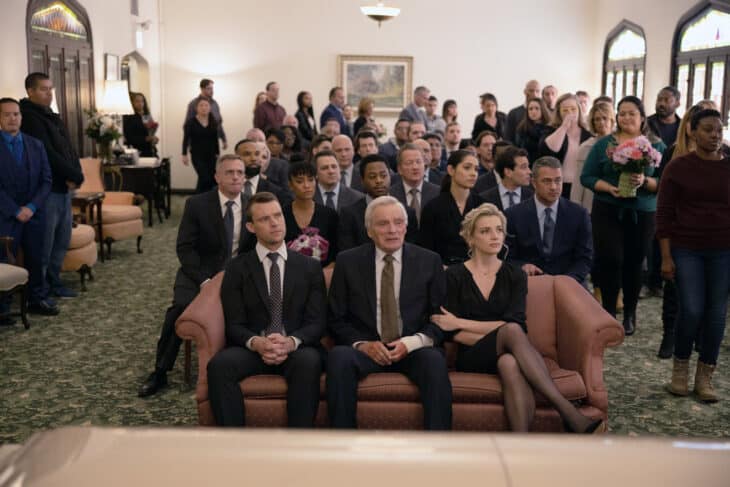 Gorsch is back to cause some trouble on Chicago Fire Season 8 Episode 13, “A Chicago Welcome.”

After Firehouse 51 mysteriously receives a shiny new truck, Gorsch shows up to the scene of a fire. Coincidence? Nope.

Supposedly, he’s showing back up because he’s interested in the work Chief Boden is doing with cancer prevention for the firefighters. He’s convincing, almost, with a personal connection to cancer and his plans to help secure a second set of gear for all of the firefighters, which would greatly reduce their exposure to carcinogens.

But Steven Boyer, who plays Gorsch, is just subtle enough to make us feel uneasy. You can listen to him speak without assuming there must be some sort of catch, even when the words coming out of his mouth are heartfelt.

After Boden and Severide work with him on getting the gear, the catch becomes clear. Gorsch is trying to have them buy gear from a friend of his — gear that hasn’t been tested. It’s shady business, but the good news, is they catch on quick. Seriously, he didn’t really think he could get something like this past those two, did he?

It’s a clever way to bring Gorsch back into the picture and to keep the cancer prevention storyline at the forefront. Even better, the firehouse is able to get the extra sets of gear, which they may not have pursued so quickly without Gorsch showing up in the first place.

Meanwhile, Joe is adjusting to Foster as a new roommate, and there are some serious growing pains. It’s really a bit painful to watch.

Joe is uncharacteristically nervous and excited about the party. He’s acting so strange about it that both Severide and Kidd find themselves scratching their heads at his behavior.

Unfortunately, when he shows up to his own apartment on the night of the party, he’s rudely turned away. Turns out, Foster was saying he should find someplace else to stay that night.

For starters, this is the kind of roommate drama you might more expect from college students than grown adults. It’s shocking that Foster doesn’t discuss the party with *both* of her roommates before making plans. Had she done so, it would have been clear that this wasn’t the type of party Joe would want to attend in the first place.

I actually have a hard time buying that her character would act in this way, and then, of course, there’s the missing detail of Brett, who also lives in this apartment.

As for the way Joe is acting leading up to the party he thinks he’ll be a part of, it turns out that it reflects some anxiety he has over getting married soon. That’s the most interesting part of all of this.

He’s fixating on this party and he’s wanting to live vicariously through Emily’s lifestyle a little, which one might argue goes even deeper than dealing with his upcoming nuptials and also has something to do with his grieving process over Otis. It’s almost his way of acting out and seeking something he doesn’t typically seek. Maybe throwing another “rager” with Foster will help him through that a bit.

I’m also curious to know how Chloe fits into all of this. Would she not have gone to the party with Joe? And was it so hard for Joe to find a place to stay when he’s engaged? Some of these smaller details could have been easily addressed, and it’s a shame they aren’t.

The best part of this episode involves Casey and Brett and a man that the firefighters rescued at the beginning of the hour, Mr. Larson.

Larson’s wife, unfortunately, doesn’t survive the fire, and it’s more heartbreaking than this kind of tragedy might typically be, because Larson and his wife had only recently moved to Chicago after retiring. It’s a place they’d always wanted to go, and they finally had the chance. Sadly, because they were new to the city, they hadn’t had the chance to make friends there yet.

That puts Larson alone in the hospital with no visitors, which makes Brett hyperfocused on finding his cat, Dusty.

She and Casey take on that mission together and find the cat pretty easily — something we learn on this episode is that cats usually find their own way out of burning buildings. (Thank goodness!)

I talk a lot about how Chicago Fire centers itself on the idea of found family, and that’s absolutely the direction this storyline takes. Mr. Larson makes funeral arrangements for his wife, but doesn’t count on many people being in attendance. Had they never moved to Chicago, he notes, she would have had a large funeral.

But Chicago shows up for each other.

It’s a sentiment we get when the firefighters are called to an incident involving a human chain — a large group of strangers working together to keep hold of a little boy who is close to falling into the river. It’s a no brainer for these strangers to work together to save the boy while they wait for first responders, and the story gets a happy outcome.

In the same way, Chicago shows up for Mr. Larson. Just as the funeral is about to begin, with only Larson in attendance, Brett and Casey show up, followed by the rest of Firehouse 51 and a line of other people, thanks to some of Casey’s prior connections.

The room becomes so full that many stay standing, and Mr. Larson is surrounded by a new sort of found family. It’s an overwhelmingly beautiful, tear-jerker of a scene that encapsulates what Chicago Fire is all about. It’s a perfect ending.

I have to back up a bit and discuss one more thing, though. Brett and Casey have some nice moments on this episode. We’ve seen a growing respect develop between these two as well as some clear chemistry, though at this point, it’s quite the slow and uncertain burn. They are clearly friends first, but they share some glances that are pretty undeniable on this episode.

Related  Chicago Fire Review: Where We End Up (Season 8 Episode 11)

Add to that, Brett opens up to Casey about the fact that her birth mother is trying to reach out — something I assume we’ll be exploring more in later episodes. In the very least, the groundwork is there, and I think it’s being laid so carefully and slowly that if they do wind up heading toward something romantic, the payoff will be fantastic.

That said, I remain bothered that Gabby’s recent appearance hasn’t come up more than it has. In my mind, there are a lot of interesting things happening with Casey’s character that we simply haven’t gotten to see on screen.

What did you think of this episode of Chicago Fire? Share your thoughts in the comments below!

Want more from Tell-Tale TV? Subscribe to our newsletter here!

Ashley is the founder and editor-in-chief of Tell-Tale TV as well as an English Instructor with degrees in Literature, Creative Writing, and Cultural Studies. She'll never grow tired of watching Gilmore Girls and is happy to talk about Buffy the Vampire Slayer for as long as anyone is willing to listen. Ashley is also a member of the Critics Choice Association and is a Tomatometer approved critic (Rotten Tomatoes).